On the Triumph Bonneville of life

The fringes on his old suede coat

Streamed far out behind him

He was majestic at the start

When the lights turned green from red

Once in a while I rode with him

Through the other side of dawn

Always close to the very edge

On the highway to oblivion

On the highway to oblivion

I never asked his back story

Seemed I didn’t need to know

Back then it was easy to be friends

With strangers in a strange land

All revved up from the get go

You could always find the gasman

With someone cool riding pillion

That highway to oblivion 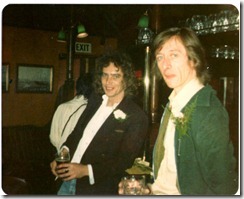 The following photo from Lorraine Murphy shows Bob 3 years before he died.

One thought on “Homage To Bob Fringes”