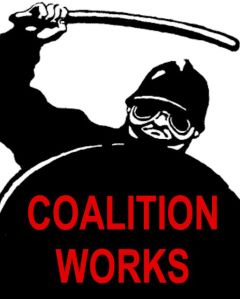 As I watched the coverage on BBC news 24 of the students protesting in Parliament Square it seemed as if the police were deliberately allowing, indeed cajoling people making, acts of destruction and disfigurement in order that the media could have something to focus on.  The BBC journalists spent all day talking about the violence coming from the protestors and filming students smashing windows and trying to batter down doors on government buildings.  At the end of the day in Parliament Square the damage was superficial, some broken windows, a couple of phone boxes smashed up and dabed with paint and a few slogans sprayed onto buildings and monuments.  This was portrayed as if the country was facing the break down of law and order.  Not true, in fact the state want to be able introduce much tougher legislation in case there is more serious unrest against the ideological attack on the public services that the people of this country have spent generations nurturing and building.  The Coalition want to destroy common ownership and replace it with privatisation in as many areas of state provision as they possibly can get away with before 2015.  It was amazing to see the polce stand back whilst “students” were allowed to aim a battering ram at the doors of the Supreme Court building for half an hour whilst Sky News and the BBC filmed it, eventually the police cleared the doorway and there was a policeman politely asking the camera operators “Have you got all the footage you need?”.  How revealing, the police had an agenda here as they did on a previous demo where a police van was deliberately allowed to be vandalised in order that pictures could be posted in the organs of the yellow pres, (Sun, Mail, Express, Star, Standard, Telegraph, Times, Standard etc) and used in TV programmes all across the globe to show what a lawless bunch of people the police are having to deal with.  Kettle the students in confined space, club a few of them, terrorise them with mounted officers weilding battons, and generally wind people up in order to provoke civil disobedience, this is the tactical approach of the police now that they have a sympathetic government in power that will not hesitate to give them whatever powers they need.  Political change is in the wind, young people are too clever to be hoodwinked by this approach, they are now getting organised in a way that was not envisaged so soon by the Tories.  In the new year when the ramifications of cuts start to hit people full force and mass redundancies start accruing, when VAT increases hit people in the pay-packet, when housing benefit cuts been people start losing their homes Cameron and his cronies want to ensure that they have the necessary powers to enforce order on the streets.  Of course as the events of Thursday 9th December 2010 show sometimes things get out of hand as the Chas and Camilla episode shows.  An unelected government bringing in policies made up on the hoof that were never put in front of the people is a recipe for disaster, either there will be an early election or there will be the impletation of a total police state, keep the cameras rolling, I need a little bit more footage…….